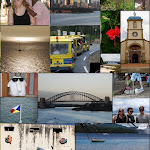 We have recently been on a South Pacific holiday. This holiday on board P&O Pacific Sun, departed Sydney on December 19, 2010. The ship sailed for four days heading toward the Pacific Island country of Vanuatu. This country is made up of many islands. The first island that we stopped at was a largely uninhabited island called Wala. This island appears to be set up for tourists with lots of stalls and the locals doing their traditional dances etc. I did hear some other passengers from the vessel speaking to a local who said that it actually come from Port Vila that morning to be on the island. A nearby island has a large church and school complex and is most probably the place where these people live. The people of Vanuatu are generally very friendly and hospitable making a very enjoyable day on the beach.

The following day Christmas Eve we docked in Port Vila. There is a mad scramble at the dock for taxis to take us into town. There was an array of local stallholders selling all sorts of souvenirs in what appears to be a fake designer goods. The taxi we caught into town seemed to be a young man making a quick $10 to ferry a carload of people into the town. It certainly wasn’t a taxi with a meter as such. We headed into a duty-free shopping, Vanuatu is apparently the best spot in the Pacific for duty-free shopping, Port Vila is full of duty-free shops. We headed to the shop that according to the Web is the best place to duty-free alcohol. We were not disappointed the booze was cheap and there was quite a variety.

The day was hot and sticky in Port Vila the temperature was about 34°C and there was a burst of rain which make a lovely steamy tropical day. We wandered about and looked at the local market. We marvelled at how many people can fit on the back of a utility. The state of the streets in Port Vila would indicate that the country doesn’t have much money for infrastructure. There was a waterfall that we could have visited immediately outside of Port Vila however as we were later to find out due to the rain it was a mud bath and we would have wasted our money going.

On Christmas Day the ship anchored off an uninhabited island called Mystery Island. There is actually a clerk on the island of states of the island is officially known as mystery Island I was even able to find it on Google maps. The people from the adjoining island come over for the day setting up stalls selling home-made souvenirs. The difference here was that the goods were genuinely made by the people and had a certain naiveté and charm. Five dollars Australian seems to be the basic unit of currency are all these items or multiples thereof. Again a lovely day was had at the beach the water was a bit cooler than the previous island but nonetheless beautiful. Locals with their hand dug outrigger canoes offered rides out on the surf. This island is also well known for snorkelling which can be achieved by almost anyone as the waters surrounding the island is relatively shallow. There is an abundance of fish that is both interesting and colourful.

The very next day Boxing Day we docked in Noumea, New Caledonia. This is a French external territory so the language spoken is primarily French and the currency is the Pacific franc. Being Boxing Day everything was shut only the tour operators who are making some quick money out of the ship were open to business. Noumea it is well known to those who cruise or spend time in the Pacific as being very expensive.

We were lucky to negotiate a bus tour for a very reasonable $10 which took us around the major sites of the city. Our guide was an expatriate English woman who had been living in Noumea for 20 years. She provided a humorous and well informed commentary on the city and indeed the province itself. It was perhaps unfortunate that the organisers of the cruise chose to dock on Boxing Day. It would have been good to see the city bustling and perhaps take the opportunity of eating out having a coffee or perhaps shopping within the city itself.

The Pacific Sun is something of a budget ship it certainly looks tired and in need of some refurbishment, then again the ship may be too old for that. As with all cruises there is plenty of food and you’re essentially live from one meal to the next. We have been on several cruises before it was our impression that the food wasn’t quite as exotic or luxurious as on other vessels. The food itself was fine but lacked that something extra which come to expect on cruise vessels. The big disappointment was the dinner on Christmas Day. There was nothing really special about this meal that set it apart from any other meals on the ship.In the days following Christmas Day we discussed this with many passengers on board and it was generally felt that it wasn’t the big Christmas dinner that we are accustomed to at home.

There was lots of entertainment but again this seemed to be a bit twee. This may have been a reflection of this being a Christmas cruise with lots of people of all ages on board. There were a couple of late night comedy shows which unfortunately were held in a bar that was packed to capacity. But there were lots of activities including dance classes in various crafts activities, wine tasting, cocktail making and so on. Something that I find curious is they have art auctions on board. These go on every day the ship is sea, I for one couldn’t imagine purchasing art when I’m on an 11 day cruise.

All in all though it represented good value and was a relaxing holiday. The company P&O had to be congratulated for their efficiency and getting passengers on and off the ship. We were required to assemble at a prearranged spot on the ship and from there to getting off the ship and through customs took less than half an hour. The cabin crew were fantastic diligent and polite and very helpful.

It is nice being away from all the shopping and general hullabaloo of Christmas time and relaxing on a cruise ship.