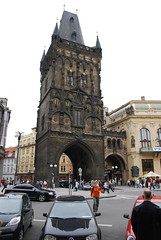 Prague, the capital of the Czech republic is filled with many great old buildings. This one is called the powder gate. Apparently in times past the fine burghers stored their gun powder here, hence the name. The city is filled with fine examples of old buildings. One old chap told me that the reason ofr this is that the city was spared the carpet bombing by the Allies during World War 2.

And the beer is not bad either.