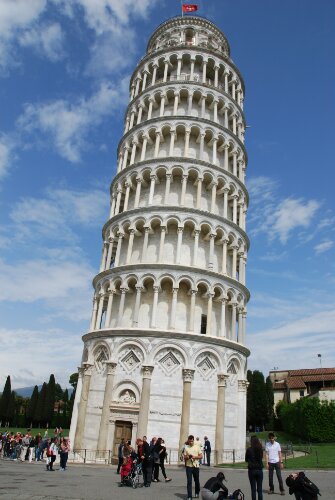 We pulled up in Livorno the gate way to Pisa. We had researched the town and there was no obvious train to Pisa. Based on our research we booked a ships tour this took us to Pisa and Lucca. When we were in Livorno we discovered that there wasa local train to Pisa for a pittance.
Livorno it self was a port town but we arrived on a day when there was a local market. We didn’t buy anything bit it was interesting.
The bus trip out to Pisa took about an hour. The tower is amazing imagine if they had done the foundations properly then nobody would care! The church at Pisa is where Gallieleo had his inspiration to develop the equations that describe the motion of a pendulum. Interesting to me but maybe not tho others.
Lucca was a beautify mediaeval town which is walled. Its most notable citizen was the composer Puccini who was born there. The walk was dampened and cut short by rain. Had we known about the local train we would have only visited Pisa. At least the sun was shining there.